GoHealth (NASDAQ:GOCO) had its price target dropped by investment analysts at Morgan Stanley from $14.00 to $13.00 in a report issued on Wednesday, Benzinga reports. The brokerage presently has an “equal weight” rating on the stock. Morgan Stanley’s target price indicates a potential upside of 24.40% from the company’s current price.

Several other brokerages have also commented on GOCO. Evercore ISI cut their price objective on GoHealth from $27.00 to $25.00 and set an “outperform” rating for the company in a report on Thursday, November 12th. Zacks Investment Research downgraded GoHealth from a “hold” rating to a “sell” rating in a research note on Tuesday, January 12th. Raymond James reaffirmed a “buy” rating on shares of GoHealth in a research report on Thursday, November 12th. Finally, Credit Suisse Group dropped their price objective on shares of GoHealth from $21.00 to $19.00 and set an “outperform” rating on the stock in a report on Tuesday. One research analyst has rated the stock with a sell rating, one has given a hold rating and ten have given a buy rating to the company’s stock. GoHealth presently has an average rating of “Buy” and an average target price of $20.00.

GoHealth (NASDAQ:GOCO) last issued its earnings results on Monday, March 8th. The company reported $0.41 earnings per share for the quarter, missing the Zacks’ consensus estimate of $0.46 by ($0.05). The business had revenue of $445.90 million during the quarter, compared to analyst estimates of $435.31 million. The firm’s revenue for the quarter was up 54.5% on a year-over-year basis. On average, research analysts predict that GoHealth will post -0.28 earnings per share for the current fiscal year.

Timing is everything when opportunities like this come around.

As a leading health insurance marketplace, GoHealth’s mission is to improve access to healthcare in America. Enrolling in a health insurance plan can be confusing for customers, and the seemingly small differences between plans can lead to significant out-of-pocket costs or lack of access to critical medicines and even providers. 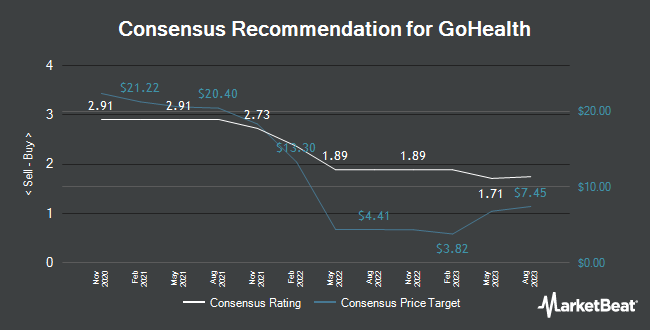 This instant news alert was generated by narrative science technology and financial data from MarketBeat in order to provide readers with the fastest and most accurate reporting. This story was reviewed by MarketBeat’s editorial team prior to publication. Please send any questions or comments about this story to [email protected]

Canadian vote in pandemic election that could cost Trudeau